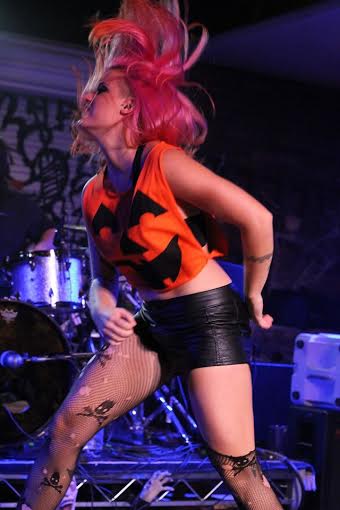 Violetta Gaetani is a young Italian musician graduated by the Musicians Institute from LA and the lead vocals on the melodic hard-rock band Afraid of My Neighbor, also settled in Los Angeles. Despite her passion for commercial rock and pop-rock cheerful tunes, Violetta is no sweet diva standing and singing while everybody around her do the hard work. Her passion for music took her to serious grounds and to the development of professional, technical skills, as well as she is an entitled professional for vocal teaching in the Musicians Institute. Right now getting ready to start a tour around the western coast promoting her band’s first EP, Violetta is just starting to pave the grounds of her route to fame.

To become a musician as eager and dedicated as she is was not as hard as it could be when you are raised in a nest of art and music. Violetta’s father, Filippo Gaetani has a music studio at the place where Violetta has grown up in the beautiful Tuscany region of Italy. The then young girl was always paying a visit to her father’s studio and her passion for all about the music process was gradually growing with her. In 2009 when she was already a teenager, she released her debut EP “Defeating the Impossible” with the help of her father through his studio, Rayrecordings. At this point, Violetta was already skilled and aware of audio engineering as well as she would be writing and singing her own songs. The desire to move to LA was the next step to make her goals as a musician to go further.

Music for Violetta must be appealing and able to bring people together, that’s why she is not ashamed to love commercial music and pursue the top notch quality of this kind of production despite being an avid fan of hard rock and heavy tunes, as they can be as appealing as anything else commercial, something she and her band are proving well. In 2012 Violetta has become part of her own band, Afraid of My Neighbor. The energetic and young quality of their heavy melodies and fierce performance is gradually setting their fame. Recently the band released their first self-titled EP and they are not shy about the success. The band is getting ready for a tour around the western coast after several enthusiastic gigs in LA. Graduated in Audio Engineering by the Musicians Institute, Violetta play a part in all aspect of her music, is the girl also behind the Pro Tools and not only the microphone as she is an eager talent forging her art and spreading it around with her musical mates. The band’s debut EP can be streamed on Spotify and is available at iTunes store.