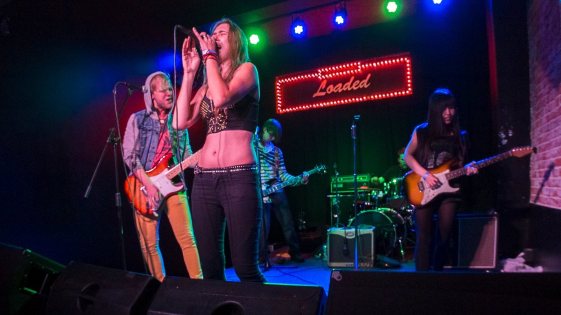 If you have heard of the band Side Effect then you must be familiar with these pop-punk musicians. With their rocking performances they just don’t stop amazing their audiences. Los Angles has many fantastic musical acts and the band Side Effects Front woman Kapri Dabrowska is no less than a gifted musician and songwriter.
Kapri is so much into her music that she moved to Los Angeles to pursue her dreams from her homeland Poland. She believes in team effort and hard work. Isn’t it amazing to find out that this versatile performer wished to get into performing ever since she was a toddler? She has always kept herself immensely close to music and this is evident from the big list of inspirations she draws upon from the music world.
Her mother encouraged her to take vocal lessons and she attended music school. Growing up her musical influences ranged from Spice Girls to Guns n’ Roses. The world of classic rock, grunge and hard rock became more a part of her life when she was eleven and here she was inspired by Led Zeppelin, Aerosmith and more. Still later came pop-punk and she got smitten by this type of music drawing inspirations from Green Day, Sugarcult, Less than Jake, Yellowcard, Good Charlotte, Mest, Sum-41, Blink -182 and many more.
Pop-punk is what resulted in the making of her band the Side Effects and this is a band of five
members including Jim Shaw (bass), John McLucas (drums), Hisako Ozawa, and Jimmy Luther (guitarists). So, it seems the world of pop-punk is all set to roll with the band Side Effects.
If we were to guess the favorite performance of this talented musician, then it is the semi-finals of Battle of the Bands for Rock On The Range. Her craze for music made her attend Musicians Institute in Hollywood and her versatility is seen from her writing all types of music and performance across various genres.
The lyrics and melody of Butch Walker inspires her and she likes to work with people who are strong melodically. Kapri seems to be all geared up and determined to create waves in the music
industry. So far, this seems to be working in a big way for this gutsy rocker from Poland!
Check out more of Side Effect at:
http://wearethesideeffect.com or https://www.facebook.com/events/560254907416961/